Sometimes it’s the students who teach. This week, 16-year-old Greta Thunberg arrived in New York City in a zero-emissions yacht, en route to the United Nations climate change summit. The purpose of the trip? Let’s call it a teachable moment.

Over the past year, Greta and more than 2 million teens around the world have led school strikes for climate justice, demanding that their leaders end the age of fossil fuels. Now these young people have declared 20 September 2019 a historic day for a global climate strike by all people, young and old.

Welcome to the US, Greta. With your help we can save the planet and ourselves

As college professors, we’ve learned much over the past 15 years from our Middlebury and Swarthmore students about standing up for climate justice. On the forefront of the climate movement, they’ve launched the worldwide fossil-fuel divestment campaign and gone on to found 350.org and the Sunrise Movement. Young brown, black and indigenous activists who have courageously stood up to powerful fossil fuel companies have taught us how all fights for justice intersect.

So on 20 September, we plan to join youth everywhere, cancel our classes and strike. With seven colleagues, we’ve just released an open letter appealing to fellow educators everywhere: put aside your teaching notes and join your students at a climate strike event near you. As Greta puts it, “Our house is on fire – let’s act like it.”

We understand that some educators – and their bosses – might object to striking. It’s true that school time is precious, and to teach is a revered responsibility. Some students’ families might take issue with a full day of cancelled classes. And let’s not forget those students who may not want to strike (even with the prospect of a day off from homework). To not teach, one might argue, is to reject learning. 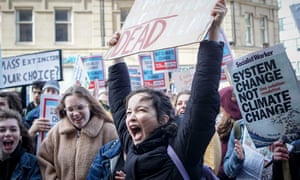 We disagree. To strike in the name of climate justice is a resounding endorsement of learning: it turns out the world’s youth have been listening to their teachers all along. They understand the science of climate disruption; they take in the lessons of history; they grapple with the complexity of market forces and the true costs of polluting. In their humanities and social science courses, they hear the voices of those at the margins and then honor their dignity and humanity through the arts.

Yet it’s also undeniable that our students – all of us – have much more to learn about climate disruption and injustice. As educators worldwide plan our fall semester courses, we have, alas, plenty of new material to teach. July was the hottest month on record, the 415th straight month warmer than the 20th century average. Europe baked this summer, while Arctic and Greenland ice melted at record paces. Legacies of colonialism and global inequality continue to put black, brown and other marginalized people in harm’s way – in June, hundreds of Indian villages were evacuated in the face of historic drought – even though they are least responsible for the crisis. Alarm bells continue to toll, louder every year.

That’s why, above all, we educators need to help strengthen the climate movement, and the start of this school year is an important moment. The eyes of the world are on young people, who are demonstrating the kind of vision and determination that has not yet taken hold in halls of power the world over. Our students love to declare, “We are the change we have been waiting for.” In fall 2019, they could not be more correct.

No educator is able to join Greta Thunberg as she continues her bold Atlantic crossing, but all of us can follow her lead. We risk losing credibility with an entire generation of students if we cannot take action in support of the defining cause of their generation.